Endora was actually my second Whippet, and arrived at about three and a half years of age from Miss Leo. Bartlam.

She had produced a litter for Leo which included Irish Champion

“Seltaeb Rushbury Catullus”, so I hoped that she would be an ideal foundation bitch for me, and indeed she was, for she is behind many successful “Mispickels” of the past.

Her first litter here was by the world famous Australian CH.Lowglen Oakbark Masterminde.It was a great success, producing B.I.S MISPICKEL MINIVET, a lovely Red/white who did a lot of winning for me.

Minivet, ( Stacie), was mated to the top producing CH. AKEFERRY JIMMY, and produced a wonderful litter which contained:

Mispickel Minuet. Dam of Ch. Dansol Daydreamer. And my Lovely...

Minivet had a second litter by Ch.Jimmy, producing:

Minivet produced her last litter in 1977, and from this came MARIONETTE. Who came with us to Canada, and founded the Canadian Mispickels. P.B. As she was known died in 1992, just before I returned to the UK,her Mum, Stasie (Minivet), lived out her life with Cousin Barbara, as I felt that she would be better staying in the U.K. 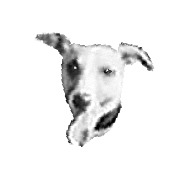 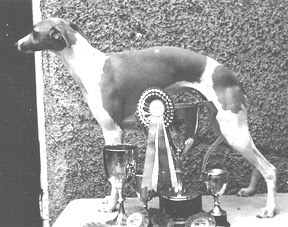 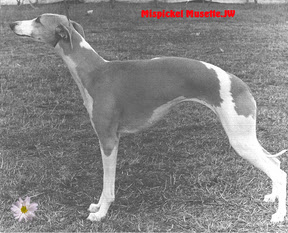 Poor Holly had a very hard time producing her only litter, ending with a C.Section, and only four surviving little boys. However, one lovely fawn was later to become:

Mustang, or “Smokey Bacon” had a big influence in Canada, and produced several

Show and field Ch. Offspring for myself, and his owner, Mrs. Jane Strunin.