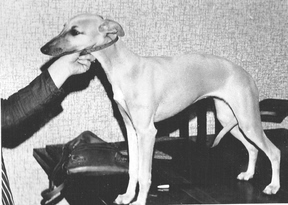 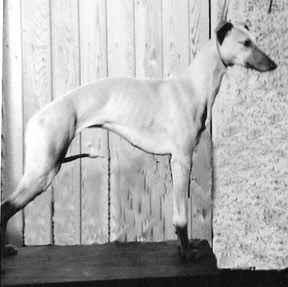 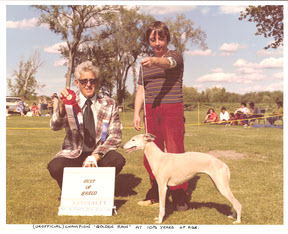 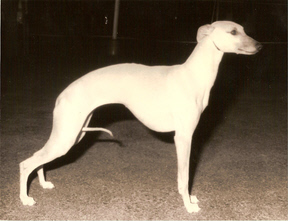 When Kerry and Paul were about 9 months old I decided that I needed a hobby-I would show Whippets. A trip was made to Wilmslow Cheshire, and back I came with two lovely Whippet bitches-GORWYNNE STAR GOLD, and baby Golden Rain. Star Gold was 18 months old, and a lovely ready to show girl. I had a lot of fun with dear Mandy, but she was never to produce a litter.

Golden Rain had a lot of success in the ring including a 2nd. At B’Ham Naional puppy stakes, a huge class. She qualified for Crufts, and that was my first great dog achievement!

Later, she produced two beautiful litters, the first by Ch. Dondelayo Buckaroo, and the second by Dondelayo Repetition.

Above: Golden Rain at 6 months of age.

Dear Honey (Golden Rain) came to Canada with us in 1980. There were very few Whippets in Manitoba, so I was persuaded to show her at the ripe old age of 10 and a half. She loved it and finished her Canadian Title in straight shows.

Honey was my soul-mate, and so I was devastated when she died at just over 12 from a ruptured disc.

Below is a picture of the beautiful Mispickel Martini winning the Rcc. At Midland Counties.

She was later sold to Jack Midgly in Scotland.

He was later sold as a pet. 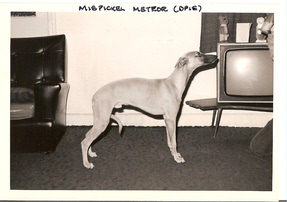